The creator of the first modern luxury tableware designed for Chinese cuisine has inspired a gastronomic rebirth.

A WAITER DISCREETLY POURS a cup of Dongding oolong tea from a pristine white porcelain teapot that gleams with the same luster and warm translucence as fine jade. Admiring its auspiciously round, full shape, Desmond Chang pauses to contemplate the size. Have the practicalities of the custom-made extra large teapot overwhelmed the delicate balance and elegance of the design? He mentally files it away for later consideration.

As partner of Legle Porcelain, Chang should certainly know best, for the teapot is a central piece in the brand’s Ruyi tableware collection. He jointly conceived and designed the line with Creative Director Peter Ting as a result of an epiphany that came one day in France while chatting about food.

Though Legle Porcelain’s collections were perfectly well-suited for French gastronomy ,the products’ profiles, such as the weight and depth of the bowls and the shape and balance of the spoons, weren’t quite right for the needs of Chinese cuisine. Both men were struck by the realization that there wasn’t one luxury tableware service meeting those needs.

“It was like I suddenly woke up,” recalls Chang. “I said, ‘Peter! Your mission is here. You are Chinese, you understand Chinese cuisine, and you are a professional porcelain designer. You must design a modern tableware service for Chinese gastronomy – for us and for all Chinese around the world.’”

Ting, a renowned name in the field, drew inspiration from the antiques, artifacts, and architecture of China (and from one classic Italian shoe designer),instilling the essence of the Chinese ethos in the collection by reviving ancient shapes and introducing modern interpretations of Chinese philosophy and feng shui traditions.

The signature Ruyi shape – rounded corners, fluid curves, and clean lines – embodies a Chinese principle, wai yuan nei fang (“round on the outside, square on the inside”), that extols the virtue of displaying generosity and accommodation while remaining principled and disciplined at heart. 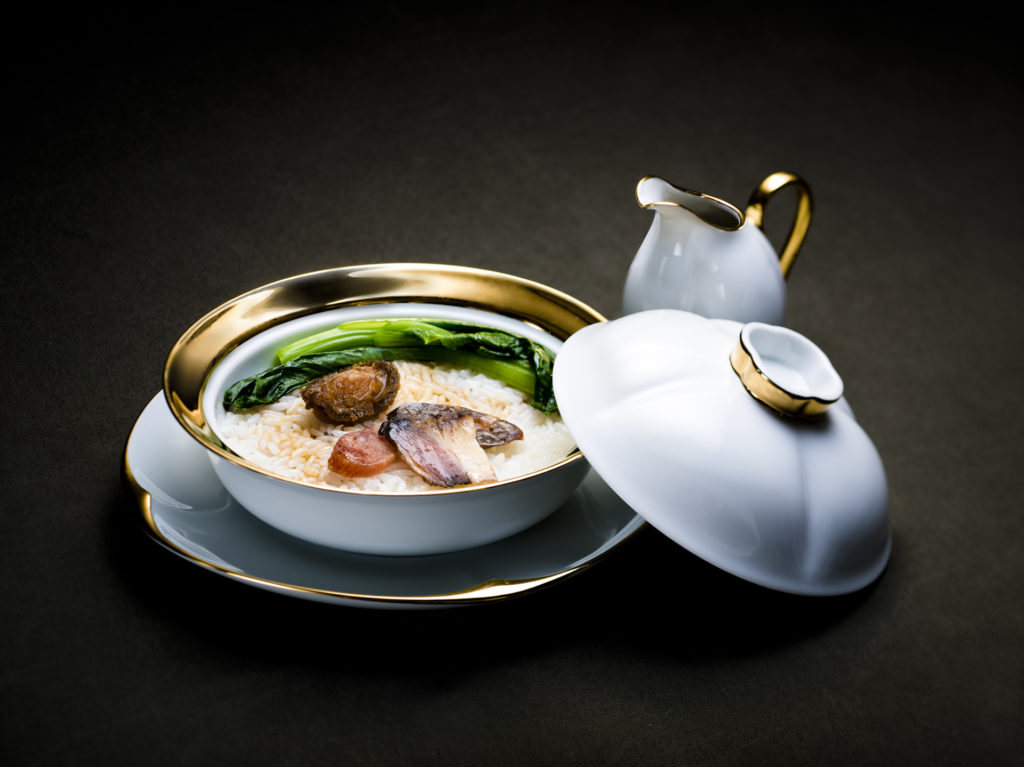 “This was a great starting point for the whole Ruyi Gastronomy experience. In the old days, the best chefs didn’t work in restaurants, they worked privately for the best families. So we presented a private kitchen experience in an old French Concession house.”

It was while delving into Chinese art history that Chang was stunned to discover the ancient traditions and social mores around dining. Paintings from the Tang dynasty depict sophisticated features like music and dancing and the pairing of food with alcoholic beverages. He learned that the dining experience during the Song dynasty was as ritualized as a modern-day visit to a threestar Michelin restaurant and included such formalities as kneeling before low tables, known as an, and the personal service of separate courses in sequence.

Ting also dealt with small design details to address the pragmatic concerns specific to Chinese cuisine. Recognizing that rice bowls are generally held in the hand, he has added a generous footrim to the bottom of the bowl and a flared lip at the top so that the diner’s hand need never touch the heated part of the bowl. He has fashioned the soup bowls with extra thickness on the bottom and a heavy lid to ensure heat retention. Even the shape of the Chinese soup spoon has been narrowed, the bowl deepened, and the curve of the handle arched like the silhouette of Ferragamo’s iconic high heel, enhancing both the utility and artistry of the spoon while preserving its light weight and balance.

Meanwhile, Chang took responsibility for dressing the shapes created by Ting. Chang delighted in researching classical designs and patterns from different periods throughout Chinese history. A replica jade pendant from the Warring States period tops a domed lid. A rose-colored dish flecked with gold represents Tang dynasty lacquer, the earliest luxury items exported from China. Integrating thousands of years of Chinese history and culture into the Ruyi collection are the cracked celadon patterns from the Song dynasty Longquan kilns, underglaze red decorations from the Yuan dynasty, and the celebrated cobalt blue and white qing-hua porcelain of the Ming and Qing dynasties.

“The Chinese were the first to have the degustation,” says Chang. “Many Chinese chefs today think that serving course by course is a Western style, but they are absolutely wrong. Even as late as 1890, it was the only way to serve meals at the imperial courts or in the homes of the rich. But we lost our culture and all the traditions of Chinese haute cuisine.”

“When we first started the Ruyi Gastronomy, we didn’t even know if anyone would be interested. But after the Ruyi at the Ritz-Carlton, where Tin Lung Heen produces some of the most sophisticated Cantonese cuisine in the world, we knew we were on to something very special and that the concept was highly appreciated by a lot of restaurateurs and hoteliers.” 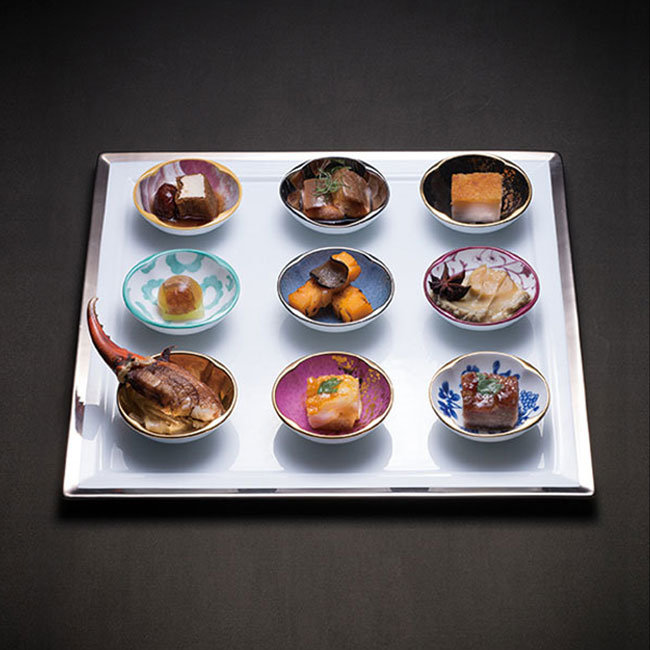 Chang saw an opportunity to showcase the Ruyi collection by means of an interactive platform that would reclaim tableware as an important element of Chinese gastronomy and help to revive the lost art of sumptuous, sophisticated Chinese fine dining. For the inaugural Ruyi Gastronomy experience in Shanghai and all the subsequent limitedrun collaborations with restaurants around Greater China, he personally curated the menu and dish pairing, challenging the respective chefs to present modern interpretations of their regional cuisines. In leading Chinese gastronomy forward, Chang worked to ensure that every single dish had a story behind it. His attention was not focused solely on the taste of the food, but also on the flow of the menu, the presentation and visual impact of the dishes, the quality of service, and the overall dining experience.

The Ruyi Gastronomy has in many ways become Chang’s calling in life. He has already hosted well over three hundred Ruyi Gastronomy events, reintroducing guests to the history, traditions, and splendor of authentic Chinese banquets. “My ultimate goal is to inspire a renaissance in Chinese cuisine,” he says, “to bring back the beauty and lavish celebration of food that we had at one time and have lost. I really want to remind people that the Chinese once knew luxury and sophistication, and then ask, ‘What happened to our sense of beauty, our taste for life and for food? Where is our soul?’”

To date, the Ruyi Gastronomy experience has explored six regional cuisines: Shanghainese, Huaiyang, Hong Kong, Cantonese, Taiwanese, and Beijing. Each stop on the Ruyi journey has involved a careful consideration of the creativity of the chef, the appropriateness of the venue, the quality of the service, and the readiness of the market.

The Taiwanese Ruyi Gastronomy at Mandarin Oriental, Taipei is currently scheduled to run through the end of January 2016 with discussions underway for a possible extension. Future plans include a permanent venue in Shanghai, pop-up experiences in Europe, and further touring around Chinese regions – Sichuan tops Chang’s list, but he is patiently waiting for the right market conditions in Chengdu.

Ultimately, Chang is hoping to spark a movement among the Chinese gastronomycommunity. “The Ruyi Gastronomy is just one voice,” he says. “We can be the first to raise the questions, but we are too small to be the ultimate answer. If Chinese chefs and restaurateurs roll with the concept and present their version of a Ruyi 2.0 – say, modern Cantonese or modern Beijing gastronomy – then maybe the renaissance in Chinese cuisine will happen.” And for Desmond Chang, creator and chief evangelist of the Ruyi Gastronomy, that would be a dream fulfilled.

“I always wanted to bring the Ruyi to Beijing, but we had to be patient. Ideally, it should take place in a siheyuan [traditional Chinese quadrangle]. Even after the Waldorf Astoria offered their location, I found the menu to be very challenging. Because, what is Beijing cuisine? In my formula, Shangdong cuisine made up the backbone, with representation from imperial court cuisine, Manchurian cuisine, and Tan cuisine.”

The World’s Best 50 Restaurants 2019: The Art of Hospitality award