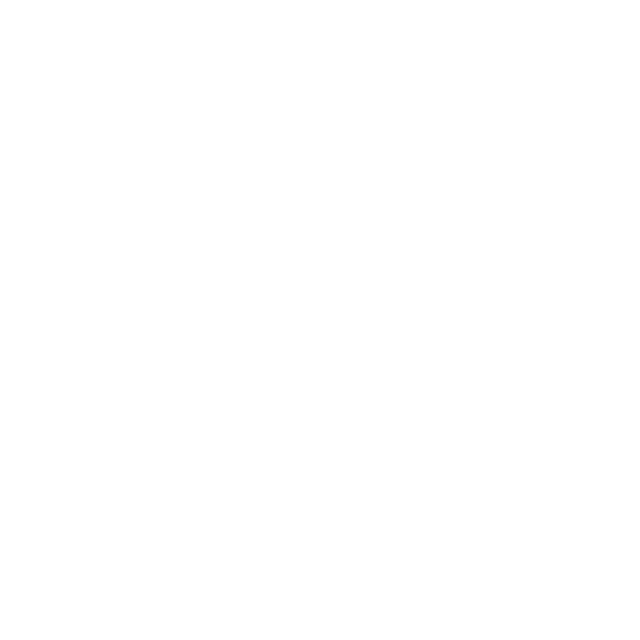 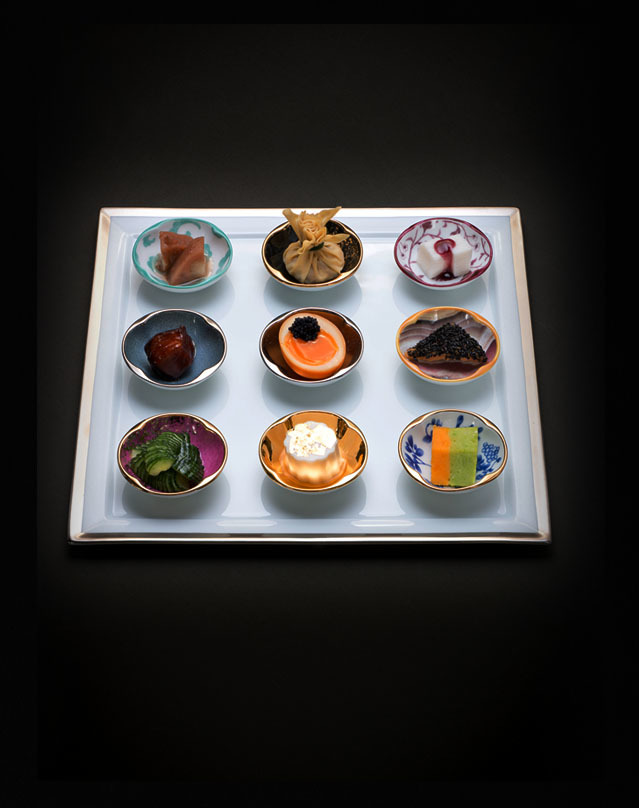 The number nine is an auspicious number in traditional Chinese culture as it represents the emperor and symbolises power and prosperity.

The Jiu Gong Ge (Nine Halls Diagram) is a traditional writing grid used to teach Chinese calligraphy but was later referenced in the culinary arts, becoming a Chinese banqueting format that appeared in important imperial feasts.

The RUYI banquet begins with an elaborate Jiu Gong Ge appetiser that is based on royal tradition but has been interpreted in a modern way.

The delicacies have been specially chosen for their visual appearance, each carefully placed on a dish of a contrasting colour by Desmond, referencing different periods of China’s porcelain history: from red from the Yuan Dynasty, to cobalt blue from the Ming Dynasty.

Overall, the plating of the nine little dishes resembles a painting. Delicate jasmine tea, with a floral scent, is also served as a refreshing accompaniment.

The soup course—a traditional banquet element—is flavoured with the finest fresh matsutake mushrooms from Yunnan province, a rare and prestigious ingredient that imparts a distinctive and appealing aroma to the dish.

Drinking this fragrant soup is like sipping a cup of fine tea, a fact wittily referenced by the soup being served in a RUYI teapot. 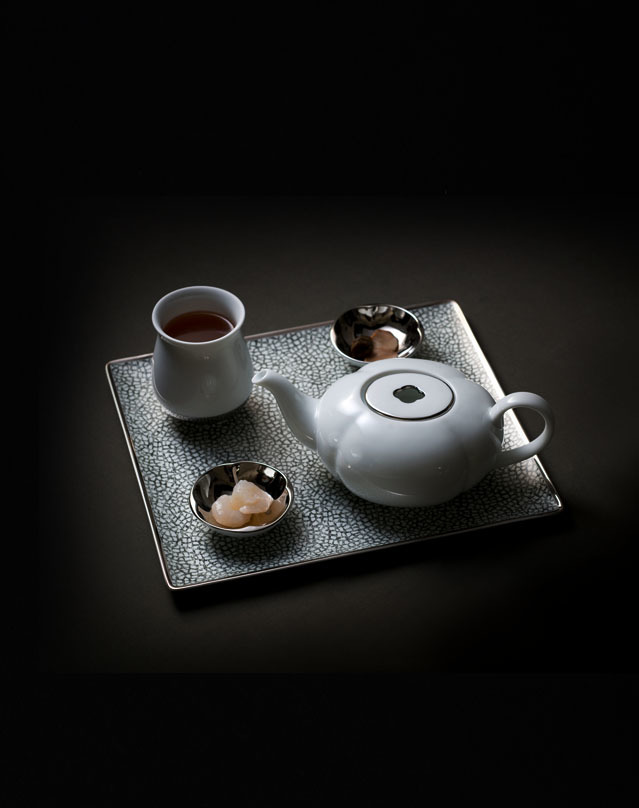 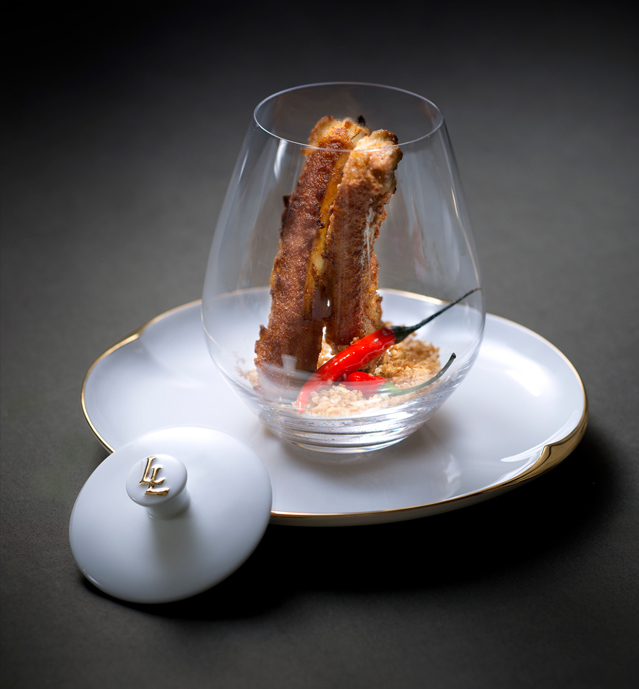 The main course of the banquet begins with two Heishan pig pork ribs—selected from the last two small ribs as they are the most tender—cooked with mashed garlic and innovatively presented in a glass container, covered with a porcelain lid.

As each diner lifts the lid, the appetising and savoury aromas of the dish will be released, adding an extra element to the dining experience.

The crystal container used to hold the garlic ribs is, in fact, a Spiegelau red wine glass that can be used for multiple purposes: as a receptacle for water, juice or even as a vase.

Using a Spiegelau wine glass to present gourmet dishes is another creative innovation of the RUYI banquet.

The transparent glass body allows the food to be revealed in its entirety, like treasures placed under a museum crystal cabinet and displayed for the world to see.

A visually stunning main course dish of dark roasted cod is strikingly presented on a golden plate, with the lustrous colour of the dish contrasting dramatically with the tableware.

As gold is a highly valued colour in Chinese culture, gold leaf is often presented as an offering to Buddhist icons as the highest mark of respect.

The yellow colour, coupled with the condensation on the glass, turns the tea into liquid gold. Breaking the norms again, the RUYI banquet transforms the chilled tea into an elegant visual experience, and the exquisite glass is a must-have for champagne lovers. 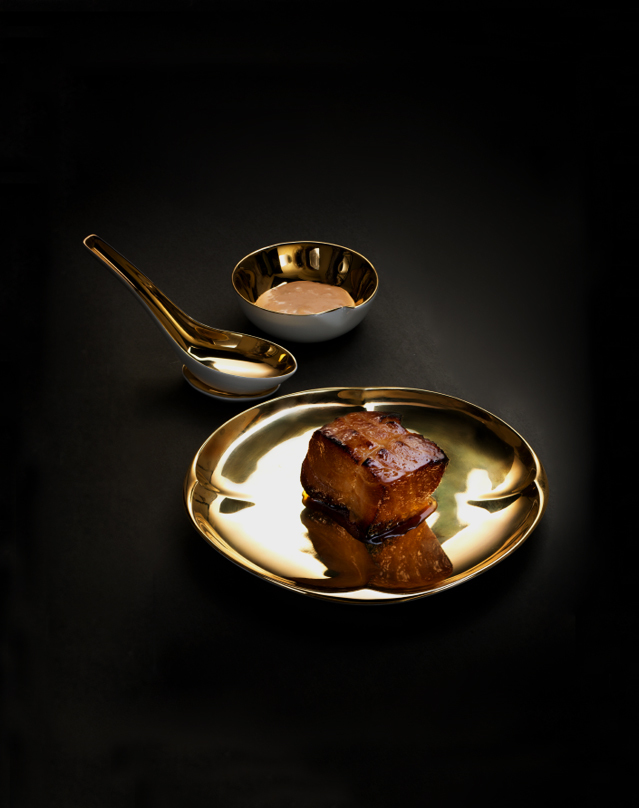 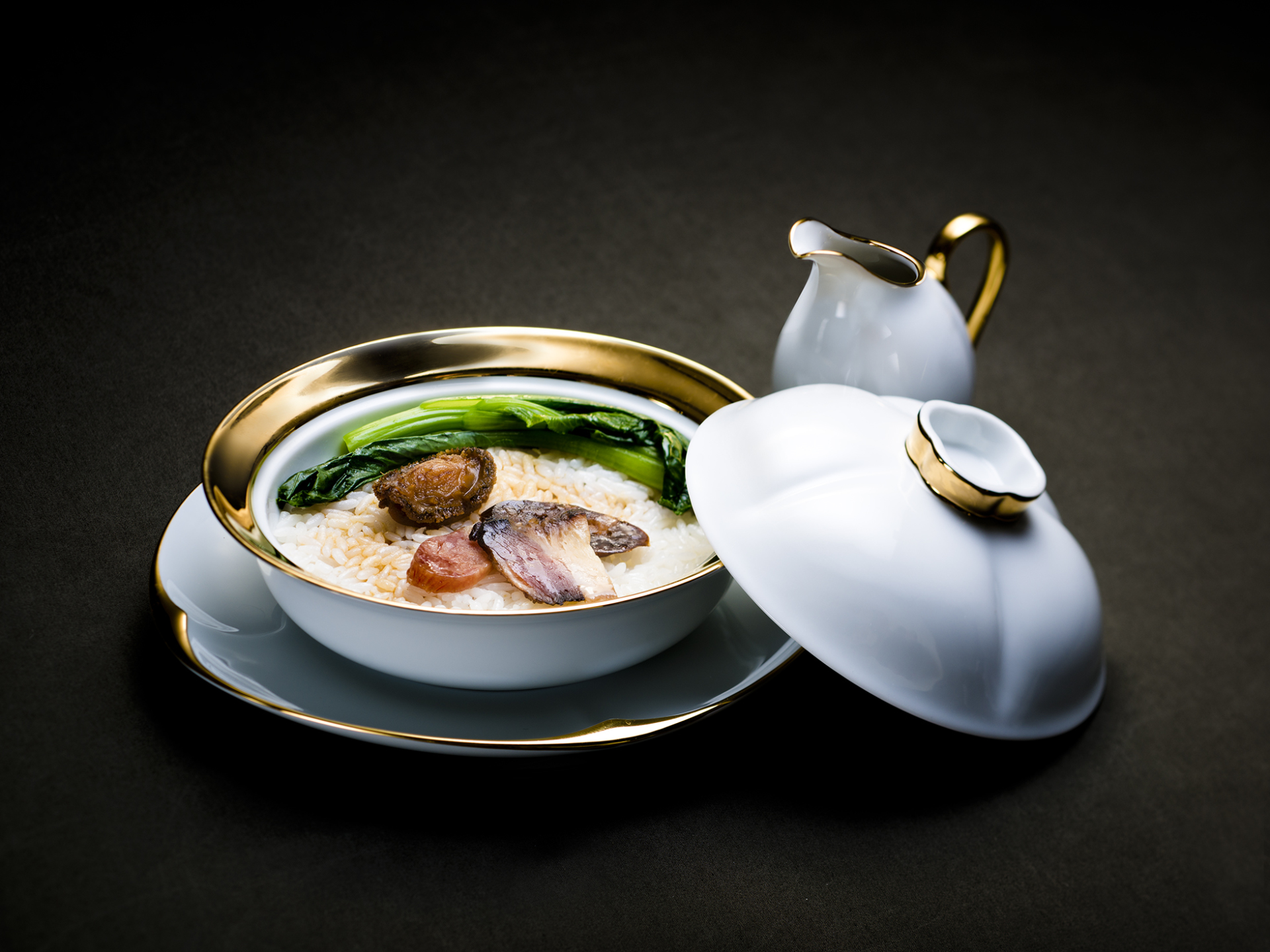 Rounding off the main courses is a claypot rice—made from the finest Hokkaido rice enriched with visually striking ingredients of Chinese sausage, abalone and dark green vegetables—presented in a RUYI lidded dish.

It holds in both the heat of the dish and its aroma. Each portion is served with a little jug of soy sauce and a golden spoon with which to eat the rice.

The petite jug holding the soy sauce is in fact a RUYI creamer. This tiny gold-rimmed pitcher is multi-purpose, ideal for either afternoon tea or holding various sauces.

The sauce is poured according to personal preference, allowing for active participation that will enhance the overall dining experience.

The tea accompanying this course is Dancong tea, an ancient tea with a history tracing back to 900 years ago, with a honey-sweet flavour that is specially chosen to blend well with the aromatic rice.

The banquet is rounded off with a dainty take on the traditional, much-loved Cantonese milk pudding, created by fast steaming and fast freezing milk custard.

The pudding is served with Tian Shan chrysanthemum tea and rock sugar.

The elegance of the Qing hua lidded bowl and the subtle fragrance of the tea adds a final touch to this gastronomical experience. 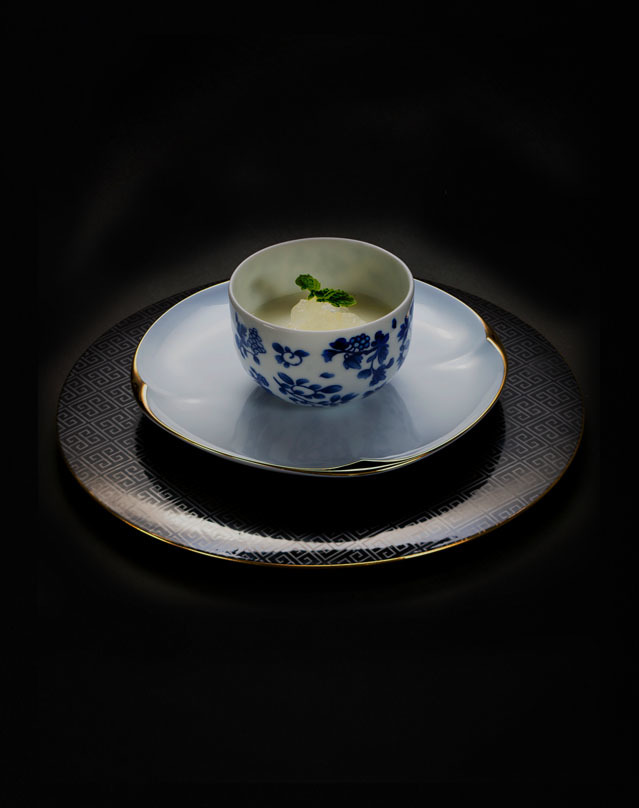 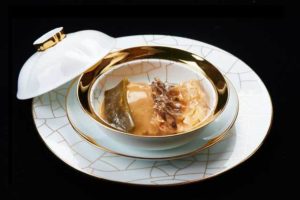 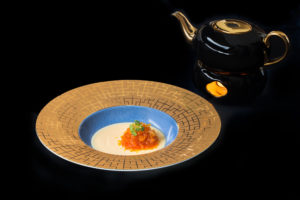 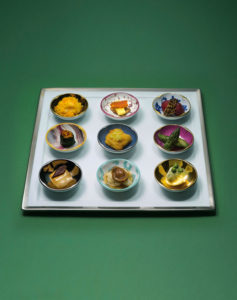 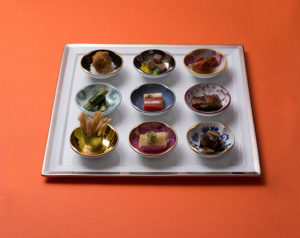 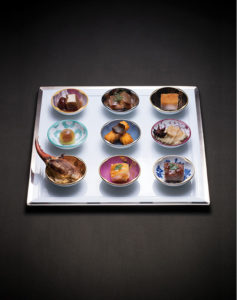 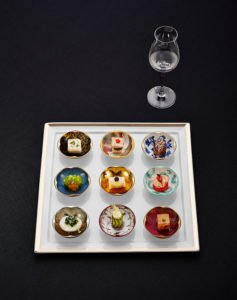 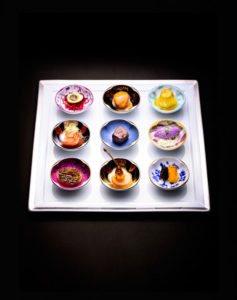